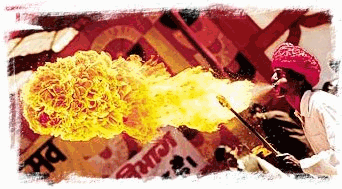 busker \BUS-kur\, noun: A person who performs an art in public places for donations of appreciation.

Buskers are that rare breed of street entertainers in search of the best place to "pitch" their artistic endeavor. Buskers can be dancers, mimes, artists, clowns, magicians, musicians, puppeteers, jugglers, acrobats, tumblers, story-tellers, and living statues. They can be sword swallowers, balloonists, fortune tellers, contortionists, escape artists, rope walkers, fire eaters, and more. The itinerant entertainers can even be just plain weird.

A busker's stage can be anywhere from fairs and festivals to trains and cablecars. Depending on their motivation, these street performers sometime travel the globe with their astounding acts reaching far-away lands and peoples with their unique form of entertainment. In some cultures, they are considered a living curiosity. With a great street stage, buskers can easily amass huge audiences with literally thousands of people entertained daily.

Busker Central's mission is all about elevating public consciousness and educating internet users what it means to be an authentic busker.

It's hard to estimate the world-wide busker population. Some have it in the tens of thousands in Europe alone. These buskers are busy performing their art just like they always have. They may even spring from a family or village with a long history of performing. Misunderstood in some lands and illegal in others, busking is truly a cultural phenomena.

Considering the term itself, the United States is one of the few countries that does not employ the English word "busker". Instead, the term "street performer" is used along side with all sorts of mis-conceptions alluding to homeless, criminal, alcoholic, and transient deeds. When dressed nonchalantly, buskers are often perceived as losers. When dressed appropriately, they are perceived as entertainers.

A major difference between an "indoor" performance and "street" performance is that the latter usually takes place on a street-corner with the unpaid busker actively soliciting tips after their show. Raw talent and crowd size play major factors in success. It is usually during the passing of the hat that people can get the outdoor performance confused with begging. If you liked the show, simply let the hat know.

While it has a considerable Irish and German musical influence, the USA only has a few major cities directly involved promoting street performing. Strangely, busking is often illegal. Police can bring charges against buskers for blocking the sidewalk, disturbing the peace, pan-handling, and begging. Fortunately in many societies, the busker is a lucky, friendly, and familiar sight. They perform, entertain young and old, travel, and make their livelihood uninterrupted as they have for hundreds of years. Many successful buskers will tell you it's all about energy.

Jugglers on unicycles defy gravity by keeping several balls in the air at once. Musicians feverishly belt out their songs for all to hear. A Mime throughly captivates a whole city block with antics without saying a single word. A street artist entertains with a 10 foot pole. A Human Statue stands motionless for hours within a deep trance. Still another busker roller-skates down the boardwalk wearing flowing sheets, a turbin, and playing guitar.

A handicapped artist is painting with his feet in Lisbon while another busker is busy doing headstands on broken shards of glass in Barcelona. Snake

charmers perform their shows in the streets of New Delhi, fire-blowers are belching smoke in Istanbul, and the hurdy gurdy man is cranking out the tunes in Vienna.

Some buskers perform all day, everyday. Some are totally unique in their performance whose style is not found anywhere else. Some buskers even compete in huge busker festivals celebrating excellence in street performing.

Right now, all over the world, buskers are busy presenting their show living a life of wonder outside the office cube and down the carefree highway. They are actively creating their own life-style and are presenting their art "in living color".

Street-corner performers are usually highly skilled in their craft by several years. Reliant on these artistic skills, buskers can often be found voyaging to distant lands performing along the way. Make no mistake about it. This is their nature doing what the real busker loves - performing, passing-the-hat, counting, and traveling - forever lost in the search...of that elusive perfect pitch.

Each month, the popular Busker Central News blog keeps you up-to-date and informed with interesting stories, legal issues, and events on busking and street performing from around the world.

The convenient Video-of-the-Month highlights everything from International Busker Festivals and interviews to troupes and social commentary. The video gallery hosts hundreds of street performers in special productions for educational and casual reference.

When you join Busker Central, you can then post topics, blog stories, read insights, adventures, and how-to's, watch videos, and listen to songs. Not to worry - Busker Central is 100% spam-free.